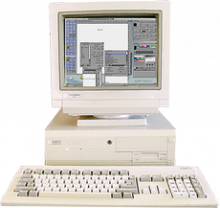 Released in October 1992 by Commodore, Amiga 4000 is the last and most powerful Amiga computer ever built. Featuting a 32-bit architecture and AGA graphics (24-bit), A4000 offers access to the full library of Amiga software. The computer is highly upgradeable and that includes accelerators, memory, CD-Rom drives, graphics, network, and audio cards, and even a 486 card for running old IBM PC software..