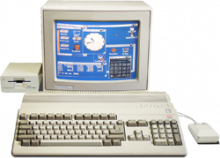 Released in April 1987, the Amiga 500 is a legendary multimedia home computer manufactured by Commodore until 1992. The A500 offered the same CPU and chipset as the original Amiga 1000, however, it had a considerably lower price tag.

Released in March 1987, the Commodore Amiga 2000 is a multi-featured business machine based on the MC68000 CPU. The A2000 features OCS hardware graphics, PCM stereo sound, multitasking, and a GUI. The model was discontinued in 1991, shortly after Commodore released the Amiga 3000. The A2000 is a very expandable computer and the first Amiga with a Zorro II bus. It was designed with an open architecture, something that led several government organizations, such as NASA, to use it for various tasks.