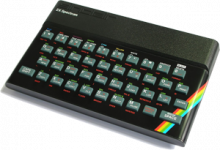 Released in 1982 by Sinclair Research, the ZX Spectrum was the first 8-bit computer that anyone could afford to buy.

Founded by Jack Tramiel, in 1958, Commodore International was an American computer manufacturer. They released a wide variety of 8/16/32-bit computers, including the Amiga line of personal computers.

Manufactured from 1986 until 1992, the Apple IIGS was the first truly multimedia Apple computer. Steve Wozniak was involved in the design and layout of the computer. Based on a 16-bit CPU, the IIGS offers significantly improved graphics and sound compared to earlier Apple II models, while being fully compatible with them (via the Mega II chip). The computer was sold for $999 or about $2,640 in today’s money.