Made for the masses, not the classes

Released in April 1985, the Atari ST was one of the first 16-bit home computers in the world. Based on Motorola 68K, the ST offered processing power, 512K of RAM, a GUI, 512 colors, and a 3-voices sound. All that for a price of $799, when the IBM PC and Macintosh could do less for a much higher price tag. Atari’s CEO used to say that the ST is made for the masses, not the classes.

The Short History of the Atari ST/STE Line

After leaving Commodore, in 1984, Jack Tramiel bought the Atari's Consumer Division from Warner Bros. The name was changed to Atari Corporation. Tramiel took with him several Commodore’s engineers, including Shiraz Shivji, who was previously involved in the C64 development. Shiraz Shivji was the head of engineers in the Atari ST line. The Atari 520/1040 ST and the MegaST sold very well in Europe and the US. However, after the release of the Commodore’s Amiga 500, things became difficult for Atari’s home computing department.

In late 1989, Atari announced the STE, a multimedia-enhanced ST, designed to directly compete with Amiga computers. The CPU remained the same, however, STE offered several improvements. It featured a new operating system, hardware graphics, 4,096 colors, and a significantly better PCM stereo sound. The STE sold particularly well in Europe, and especially in France, the United Kingdom, and Germany.

Later models, included the Atari TT and Falcon computers, both based on Motorola 68030. The Falcon 030 was ahead of its time by featuring a 24-bit color palette, 16 PCM sound channels (50 kHz), and the 56001 DSP chip running at 16 MIPS. However, it was too late for Atari. They were constantly losing market share since the start of the 1990s. Only a few months after the Falcon release, the company closed its computer department to concentrate on the new Jaguar gaming console.

This is some basic information, and sales figures, regarding the family of Atari's 16/32-bit computers. 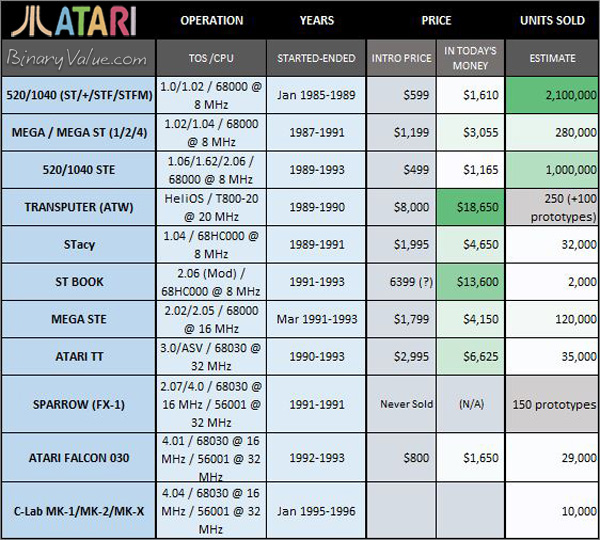 The Atari ST used a bitmapped color GUI before any other computer. Originally, Microsoft proposed to port Windows to the ST platform, but Atari refused since they needed to wait for two years. Therefore, they decided to adopt Digital Research's GEM.

MiNT is a free operating system, an alternative to the kernel of the Atari ST. » MiNT information and downloads here

The Atari ST is a line of personal and business computers manufactured by Atari Corporation between 1985-1993. The Atari ST was the first personal computer with a bitmapped color GUI. 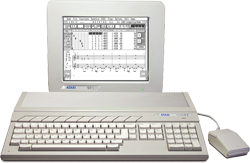 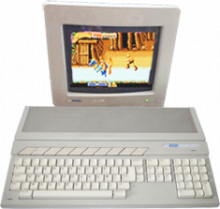 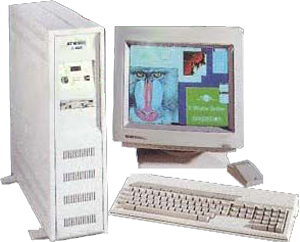 The built-in MIDI ports and low-latency response times made Atari ST very popular among musicians. These are some of those: